He has aluminum alloy housing, transfer rate of up to 5 Gbps and uses 3 parts of the VLI812 chipset, as USB controllers 3.0. The cable has 1 meter in length.

My PC (Motherboard ASUS Z87-DELUXE) has plenty of USB ports 3.0, but they are located on the back. On the front are just two, obtained through a USB header 3.0 Motherboard. But, they are also at the top of the Cabinet (Coolermaster HAF X) and is not very practical to connect powerbanks, External HD and other heavy devices with short handle.

I was already using 2 USB Extender cables to connect a External HD and an POWERBANK. I was also using an old USB Hub 2.0 to switch on the phone dock. The iPad I've been calling the outlet charger, because the USB ports 3.0 the PC does not provide enough power.

I decided it was time to adopt a better solution. Want a USB HUB 3.0 with several doors to leave together to monitor and facilitate the connection of devices such as those already mentioned, In addition to loaders smart watch, speedometer, iPod, joysticks, and other items.

Among many few brands known devices and unbranded, Orico devices are those that most caught my attention. Sounds like a fairly reliable brand, that makes devices well built.

I have no history with the brand except for another simplest hub, at Hub USB 3.0 with 4 portas ORICO W8PH4-U3. He's connected on my MSI Cubes 2 and works perfectly.

I ended up choosing so the Hub USB 3.0 Orico A3H13P2 the abundance of ports and external power supply. 13 Gates is more than enough for what I need. In addition he also has two additional ports for quick charge, What also came in handy as I'll explain later.

The Hub USB 3.0 Orico A3H13P2 comes in a cardboard box well protected. Inside we have the hub, USB cable 3.0, power supply and power cord.

Aluminum casting and the weight of the Hub USB 3.0 Orico A3H13P2 give an appearance that the product is well built. Are 13 USB slides 3.0, with blue connector and two USB ports for loading, a Universal (U) 1A and a Super Charger (S) of 2, 4A.

I don't know exactly referred “Super Charger”. There is a Huawei technology called Supercharge, so maybe she. The Supercharge is compatible with the USB specification-PD (Usb Power Delivery), which is adopted by some manufacturers, including Apple.

On the back there is the entrance to the USB cable 3.0 that comes from the PC, the power supply input and a switch to turn on the device.

In the bottom of the Hub USB 3.0 Orico A3H13P2 There is an indication that it accepts 12V and 5A as input. This is the same voltage and current source output. Thus, I understand that the circuit to convert 12V to 5V is within the hub itself. The source accepts 100 ~ 240V input, with maximum current of 1 .5A.

It's easy to see that the voltage and power does not close. With an input of 12V and 5A, We have power 60W. A USB port 3.0 common should provide 5V and until 0, 9A. This gives us a consumption of up to 4, 5W per port. If each of the 13 doors are working with the maximum current, We would have 58, 5W. And we still need more 5W to the cargo door and other Universal 12W for the cargo door Super Charger. There are 75, 5W of power, not to mention the losses.

Of course, in typical use is not even close to consume this whole power, but I have some doubts that the Hub USB 3.0 Orico A3H13P2 could feed 13 External hard drives simultaneously, for example.

In my tests I connected everything found ahead in the Hub USB 3.0 Orico A3H13P2: External HD, Chargers, pendrives, etc. and he did it all without any major problems.

It should be noted that the cargo doors are charging only, no data connection. I ended up devoting the universal charging port for phone dock, for so it loads quickly. With the testator measure up to more than 1A being provided for Z Play Bike.

At first I connected my iPad 2018 into a USB port 3.0 common and he even normally carried by them, since the micro was attached at the time of connection. If he hung up after the load kept, but if he is off or in standby mode, the load did not start. After a while I noticed that not always that way he carried, so I ended up devoting the door to the Super Charger iPad 2018, where he always carries correctly. It should be noted that the iPad 2018 also does not carry the USB ports 3.0 from my PC, then even surprised me that eventually he press the hub of data ports.

For all other less demanding devices: smart watch, speedometer, iPod, joysticks, etc. You can not go wrong. They carry the USB ports 3.0 common no major problems.

One point I did not like the Hub USB 3.0 Orico A3H13P2 It is that it always comes back off after a power outage, and must be turned on again by the button. I preferred him to return to the state it was previously, or the button was a switch lockable. I dropped it on the UPS to minimize the inconvenience.

Check out the photos and video of the unboxing and testing of the Hub USB 3.0 Orico A3H13P2:

These are the tracking information package, according to the system of AliExpress:

And these are the tracking information package, obtained on the site of the station:

It, Finally, We got the table-summary of purchase:

Share this article with your friends if you liked

. If you also want to shop in AliExpress, direto from China, click here and good shopping.

Skooter is a computer scientist and the founder of Skooter Blog. He is interested in everything related to technology and he likes to save money by making his purchases directly from abroad. 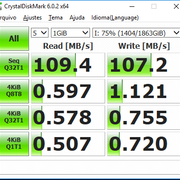 Netflix and Amazon Prime having trouble playing videos on TV? DualShock may be to blame 4 - Problems and Solutions - Skooter Blog

[…] eu carregava meus controles no Hub USB do meu PC, mas tem outra bizarrice nesse caso: when DualShock 4 no PC is connected, the monitor does not […]

[…] the two batteries in the charger and plugged the charger into one of the ports on my USB Hub 3.0 Orico A3H13P2. The LCD display lit up and the batteries started to run […]

[…] I had been loading these controllers on my TV's USB ports or on the USB Hub 3.0 Orico A3H13P2 that I use on my PC. The problem is that some controllers cause strange behavior when […]

wpDiscuz
6
0
We would like to know what you think, Leave your commentx
()
x
| Reply